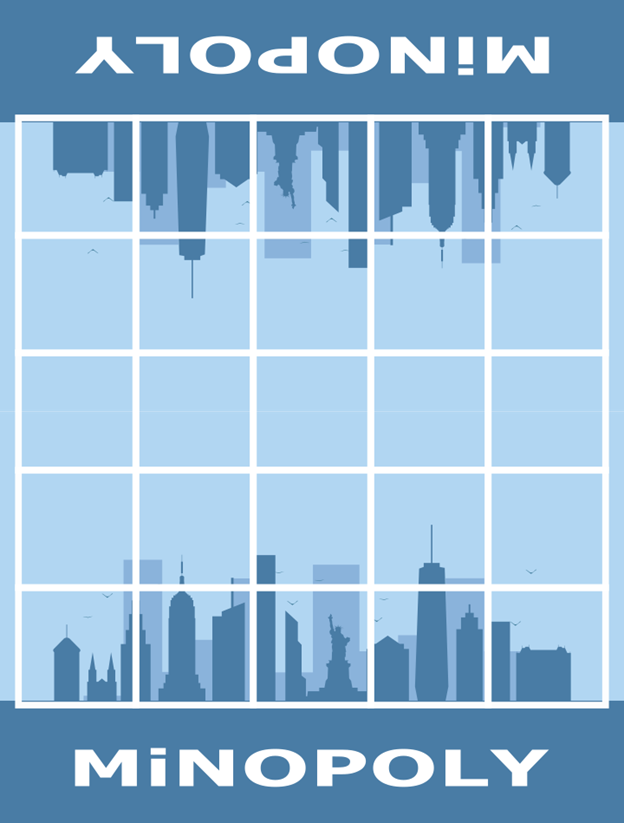 Paper and pencil for keeping score

The player who can “see” the most buildings from his side of the board when the game ends is the winner.

The non-dealer starts and turns then alternate. Rotate the start player after each round.

The game is played over “4” rounds. A player on his turn first draws four dice from the bag. In each turn a player has up to three throws rolling four dice, setting aside any, and rolling the remainder. They do not have to use all three throws and may stop after the first or second.

Just like in Tetris, a player must orient the selected shape in a way that enables him to place all the dice on empty spaces. This means the shape must neither overlap with previously placed dice nor extend beyond the playing grid. If none of his two shapes allows him to place four dice according to the rules, he must pass.

Each player has two open cards, cards display one of five tetromino shapes. The active player chooses one of his cards and places this card face-up to the left of the board and then places his four dice onto the board matching the shape of the chosen card, any rotation and/or reflection of the shape may be used. He now adds the fifth card placing it next to his remaining card in front of him and passes the draw bag to his opponent.

A player unable to take his turn may pass. If both players pass one after the other, the round ends triggering a scoring phase.

The top face values of the rolled dice represent the height of a building, a value of “1” is the shortest building and a value of “6” would make it the tallest building.

The buildings or “dice” that can be seen from your side of the board are counted in each of the five columns to determine your score. Your opponent does the same.

Scoring Example – The player on this side can see in the first column the 1, 4, 5 and 6; in the second column 2, 3 and 5; in the third column 3 and 5; in the fourth column just the 6; and in the fifth column 4 and 6. So this player sees 12 buildings for a score of 12. In addition, this player sees three out of the four buildings all having the same color in column two, he gains an additional 5 points making his total 17. 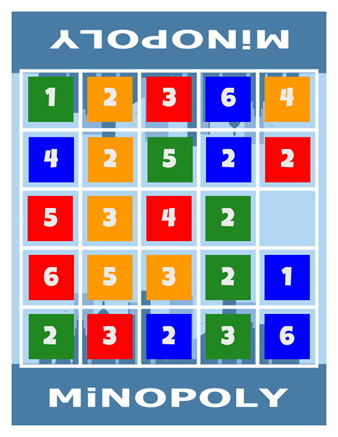 The player on this side can see in the first column the 2 and 6; in the second column 3 and 5; in the third column 2, 3, 4 & 5; in the fourth column the 3 & 6; and in the fifth column just the 6. So, this player sees 11 buildings. In addition, because this player can see four buildings in sequence and of different colors in column three, he gains an additional 10 bonus points for a total score of 21.

Bonus points are scored after the end of a round and are only scored by the player who can see the most buildings in that column.

Score 5 bonus points for one of the following in any column:

• 4 buildings of the same color.

• 4 buildings containing all four colors or

Score 10 bonus for one of the following in any column:

After each round clear the dice from the board and return them to the bag.