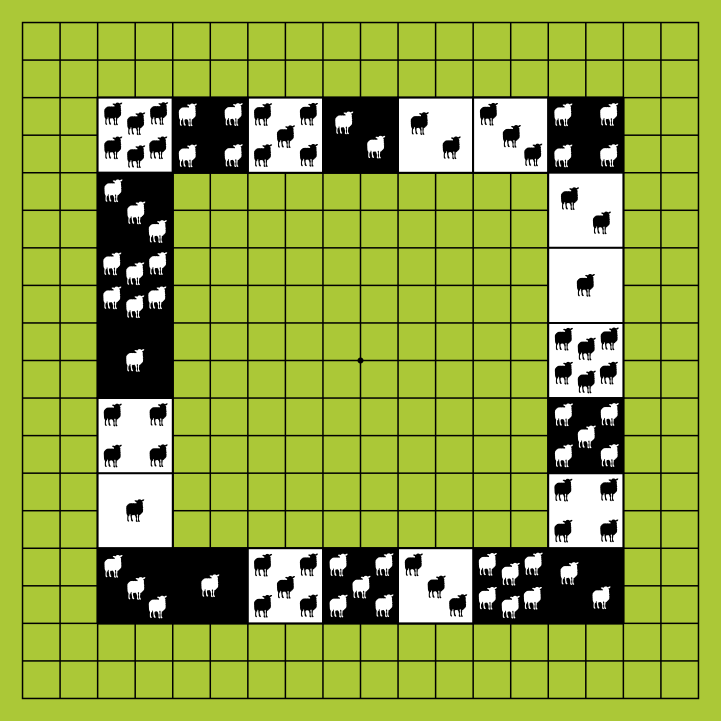 A game where sheep leave their pen and then flock together. Your goal is to end up with a flock containing the most sheep of your color.

One set black-up is randomly mixed with the other set white-up and then randomly dealt out in a ring enclosing the 9 central points of a go board, forming a pen.

On a turn, Sheep always move orthogonally a distance of exactly 5 steps, and if not forming a flock, they then flip over. They are allowed one change of direction per move.

The game has two phases: 1) Dispersing from the pen, 2) Flocking together.

1) Dispersing from the pen,

During the Dispersing phase, priority is given to moving sheep that have the most length of shared edges. The sheep must move to reduce the total length of connections, and the number of touching corners. The Dispersing phase ends when no sheep are touching each other.

During this phase, the sheep may move next to one another. When they end up sharing more than a corner with other friendly sheep, they form a flock and are not required to complete the turn with is flip. Flocked sheep no longer move and may not be flipped.

The game ends when all the sheep are in Flocks.